It's all been a bit busy here lately, hence the later than usual post. DH & I went to Dublin for 3 nights to celebrate his 'special' birthday which was on Tuesday which was lovely. Neither of us had ever been to Ireland before so it was a real treat and great to do something different. I hardly did any knitting at all while away, though I did finally manage to cast on the second Sweet Georgia Speed Demon sock........ though have managed only about 20 rows so far ;)

I was surprised at how little yarn was on sale in Dublin, and not one single skein of Rowan was seen! We popped into a shop that I'd heard had some but only had acrylic and eyelash yarn so that info was out of date. We happened to spot it as we were wandering around so at least hadn't made a special journey. There is a shop listed on the Rowan site but as it was a bus ride away didn't think it fair to DH to drag him off, especially as the break was for him.

The only knitting related item I bought was a pair of angora/wool socks which are lovely and soft. But when I put them on was really disappointed with the toe seam. Boy doesn't making your own socks really appreciate well made socks! They are comfy though and are great bed socks. 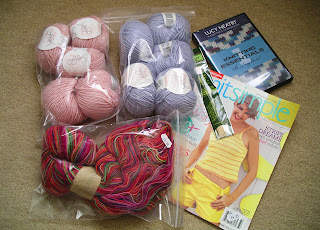 We did manage another visit to Get Knitted the previous weekend where I stumbled on some GGH cashmere in the sale for £1 a ball! So of course I had to buy some. You can't turn down bargains like that, I mean.....100% cashmere! I also picked up the sock yarn in the sale too and the latest issue of Knit Simple which I really like for once. It is a surprisingly good issue. And somehow the Lucy Neatby DVD managed to fall in my basket - how did that happen? Unfortunately I've not had any time to watch it yet which kinda says how its been round here lately. And lastly some DPNs in the new Clover sizes, this set are a 2.75mm in case my new sock kit contains some mediumweight STR. Ya gotta be prepared ;)

Work went absolutely manic before we left and it was a pretty stressful time and all the things I'd planned to do just didn't get done. Happens that way sometimes doens't it? I have done quite a bit knitting wise these past few weeks but just haven't had the time for finishing, sewing up or photos. Maybe next post eh?

I did manage to finish After Dark which only used 3 skeins of Summer Tweed for the size 8. She looks really lovely already and I think will be fab when all complete and beads added. Talking of beads, I was kinda shocked when I realised they would cost £9! I mean, thats almost the price of a couple of skeins....but then when I had a look at alternatives realised there were plenty of beads far more expensive and of course I really wanted the Rowan ones as they look so lovely. So DH got them for me as a little treat. I would have got them eventually, but it is nice to have them all ready and waiting ;)

Tulip has been started and the back isn't far from completion with only the short row shoulders to do but no photo yet as there isn't much to show really. I'm loving knitting with Damask though which is much softer than I expected. Its a very tactile yarn which surprises me considering the composition. Though I'm finding it a little hard going using 3.75mm needles. It definitely feels like its taking forever. Definitely not a quick knit for me ;) 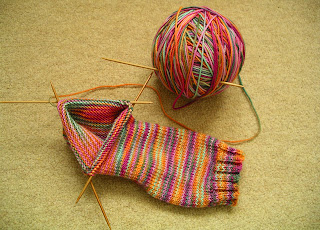 I was so expecting to have my Socks That Rock Sock Club Kit arrive whilst in Dublin but they didn't which was a little disappointing, but they're on they're way and hopefully will arrive really soon. I can't help hoping they'll arrive each day and have given reading up the KAL as I don't want to hear about everyone else having theirs already! So instead of a pic of my not yet arrived kit here we have a WIP of the lovely colourway Fairgrounds which is not far off finished now. Only one more sock to go then...... 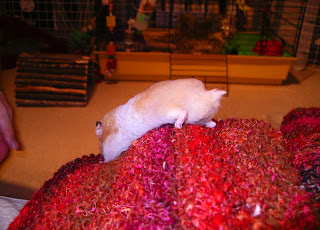 Our super duper lovely hamster Custard also celebrated a special birthday and has now reached the grand old age of 3!!! He is still lively if a little wobbly on his legs which explains why its so hard to get a photo of his face these days as I don't like using the flash much near him anymore. Doesn't my Iro coat look lovely though (yes, its still waiting to be sewn up...). Custard is such a sweetie and really quite tolerant of his daily eye drops and totally addicted to organic sunflower seeds ;)
Posted by RoxyK at 10:00 pm

Happy birthday to your DH and to Custard!! You always seem to get SO MUCH knitting done - even when you don't think you have!

Happy Belated birthday to your DH and to Custard too!! You sound like you've been busy, can't wait to see your After Dark, when finished. I'm still waiting for my STR package too, and trying to avoid looking at others blogs, so not to spoil the surprise!

Gosh, that cashmere sounded a bargain. I will be interested to hear what the DVD is like and what sort of level it is pitched at. It must be much better to learn from that books. I look forward to seeing all your knits too!

Happy belated birthday to your hubby. What a great way to spend a birthday.

Can't believe Custard is 3. Those sunflower seeds must be a fountain of youth.

Belated birthday greetings to Custard and DH too of course!
Sounds like you had a brill time in Ireland, shame there was a lack of yarn shops!
What bargains you got in Get Knitted!
Fairground STR looks gorgeous too, bet you can't wait for your next parcel!

Happy birthday to your DH and of course to Custard! Wow he's getting up there in Hamster years!

I was just looking at your striped sweater from your previous post and I have to say, you always do the nicest finishing- I have to ask, how did you learn to finish so neatly? Were you just self-taught, or do you use specific books as references? I only ask because I am a terrible finisher and tend to mainly knit sweaters that involve only minimal finishing- so I am just curious as to the secret to your finishing success.

Yeah, happy birthday to Custard (and your DH). He does look like Thorin doesn't he (Custard that is ;) - Thorin who managed to escape the other night but who, thankfully, was apprehended later the next day.

The STR look wonderful and am pleased to say I've finally ordered some. Although not mediumweight as that all seems to have gone on the sock club (!) but some lightweight - cant wait for it to arrive.