I can't tell you how much I wish for a post full of this and that, nothing happening, blah blah blah. Of course judging by recent events, its just not going to happen anytime soon. So here goes.

Firstly, I had a back tooth causing me pain when I brushed my teeth. After a few days of this I realised something wasn't right. Surely a sensitive tooth wouldn't throb for hours after you'd had something cold to eat? Did some googling and confirmed my fears, yes a trip to the dentist was indeed in order. Piddle. Extreme piddle. I hate the dentist with a vengeance. It terrifies me. Even a routine check up makes me break out in a cold sweat. I think you get the picture. So I get an emergency appointment lunchtime and leave work warning them that if I need anything done I won't be back and take a bunch of paperwork with me. I had to wait over half an hour with the child from hell screaming 'mummy' constantly while his mum was in the dentist. His father unfortunately seemed to have the intelligence level of the child and did nothing about it except play music on his phone to try and distract the evil child - but it actually just made him laugh and scream louder.

So my nerves were even more shot to pieces when I finally went in. I won't bore you with the details and frankly, I don't want to even think about it, but I had a filling and left with the ominous words 'make sure you have plenty of painkillers handy'. Oh boy, he was right about that. All is well now though and maybe the threat to see how its going next month won't amount to much. He did take a picture of the the tooth to the what the root canal was like.......yeah right, he hasn't got a hope in hell of getting anywhere near that I can tell you!

Then we have a few days of relative calm, well a week almost. Then as we're leaving Weston-Super-Mare last Saturday to visit Get Knitted to buy a swift for me a gift for doing DHs tax return, the ruddy idiot drives into the car in front at a roundabout. Which wasn't even moving......

It ruined the day, the weekend and the week. I've been so cross with him as it was so avoidable. DH always drives too fast at roundabouts and too close to the car in front. And did the same thing last year in his van. Not at a roundabout though. But we were in MY car and there is a lot of damage. Luckily the other car only ended up with a small dent on the towbar - which explains why there is so much damage to mine. Of course, who deals with it all. Me. And I am not happy. I have to be without a car when its being fixed in a week or 2 and frankly, I'm bloody fed up.

The only possible good thing to come out of it is that DH seems to have calmed down and isn't driving like an idiot any more......and it had better stay that way or else! 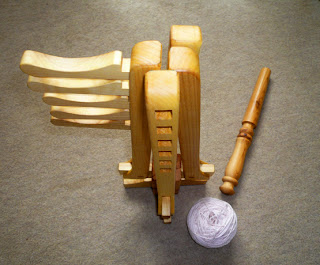 Anyway, back to nicer subjects. We did actually make it to Get Knitted though I was a million miles away from a good mood, and my swift was duly bought as you can see. See how well it goes with my nostepinne that I'd ordered from Woolly Workshop as soon as they got them in. That's what prompted the yarn swift, as DH said as I had the nostepinne why not get the swift as a pressie. Yes, I know he can be wonderful, just wished that extended to his driving. It was a great idea as it is far easier using the nostepinne with the swift rather than on its own and I'm quite pround of the center pull ball in the pic. I had tried several times, but found winding a real challenge with the nostepinne on its own. So my yarn winding issues are solved and I don't have to wait for DH to be home anymore. Its far from a necessity, but a really nice gift that makes life a little easier ;) And lets face it, anything that does that is well worth it right now! 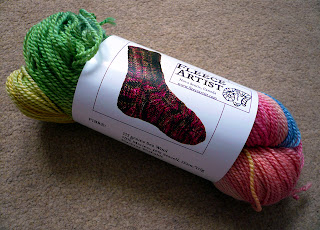 I also got a skein of Fleece Artist Sea Wool as an extra gift which is gorgeous. The shade is Sorbetto and its just too yummy for words and it comes with a free Bordello pattern too which is lovely. I also did such an embarassing thing that I'm just quite horrified about while in GK. I'd been talking about what to do with Foxglove and the edging which I'd brought with me and looked at a pattern in a book for a design that was on display as I quite liked the edging of. And thought I'd put it back. I mean, the booklet was full of mohair designs which I'm allergic too so would never use. So.........you can imagine my horror when I got home to find the booklet in my bag with Foxglove! I must have put the booklet in the bag when I put Foxglove back. It is just too awful for words and I can't believe I did it. Must have been the shock and stress of the accident making me so absentminded. Of course I emailed Sue and will return the book. But how embarassing ;( 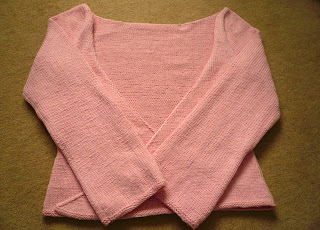 I'm now working on a very simple border for Foxglove but until its finished won't know if its worked or not. The crochet ideas and lace ones just didn't work out. As you can see from the pic, it needs a rather wide border as there is nothing on the shoulder area at all! So anything too fussy will not look good on such a big area. And of course it needs to fit well as its covering the shoulders and neckline. Talk about a challenge. Calmer is such a stretchy yarn too and that certainly doesn't help either. But its looking ok so far, and fingers crossed I don't have to redo it.......... 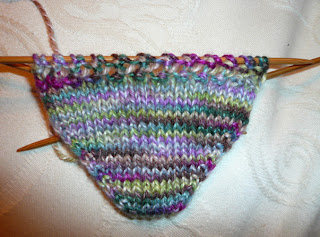 Sock knitting has been very stop and start. I tried and failed to make the Grasshoppers pattern included with the 2nd Socks That Rock Kit. And this was as far as I'd got before I realised the pattern wasn't for me. No, I don't really want large holes in my socks. But I'm glad I started it and got the hang of the pattern. Though I frogged it twice before that happened. 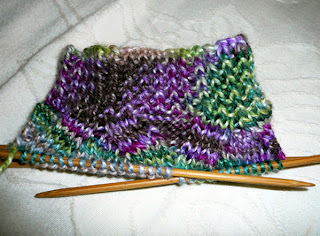 Then I moved onto Monkey socks which I love. And happily had done the first repeat when my nagging fears were realised. Yup, too big. So frogged and cast on with smaller needles. Did pattern repeat. Yup, same again. Still too big. Is pretty though isn't it? See a theme developing here. So I posted on the STR sockclub blog and luckily was given instructions for making the sock smaller. As the pattern is a 16 stitch repeat it didn't look like it could be done. But it can. However, all this frogging has taken quite a toll on my Silkie yarn so decided they wanted to be plain. So Widdershins they will be which follows the style of the STR pattern anyway.

I will still make Monkey socks, but probably will use Sherbet for them as I think they look better with brighter colours. So I can now add the backwards loop cast on for another toe up method. A very fiddly method, but something else learnt all the same :) 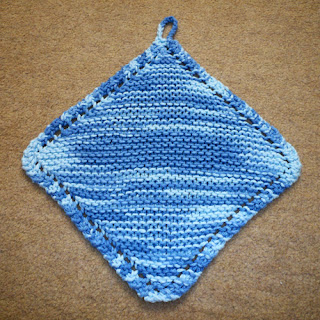 I finished this washcloth in Sugar'n Creme a few weeks back for DH, but some reason forgot to take a photo of the FO before it got used. But its still looking good and DH is very happy with it. 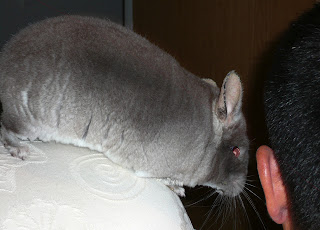 This is Chilli having a little chat with his dad. Probably telling how much a bully Roo is and it really isn't necessary for 3 weeks of antibiotics. But it goes in one ear and out the other as his wound has gone down and is healing rather nicely. Or of course he could just be about to nibble his ear ;) 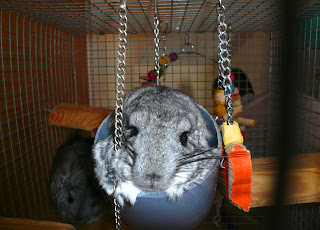 I love this photo of Roxy. He's gone into hiding in his plastic tube away from his bully of a brother Roo. Who is in the pic at the back, no doubt scheming up some more bad behaviour! Doesn't Roxy look so cute though ;)

I'll leave you with this. An oldie, but I find it rather soothing. And frankly, I need plenty of it! Plus who doesn't want to be described as an accomplished knitter and purist? And of course, I am a self confessed yarn snob ;)

What Kind of Knitter Are You?

You appear to be a Knitting Purist. You are an accomplished knitter producing beautiful pieces with a classic feel. You sometimes lament losing half of your local yarn shop to garish novelty yarns. Perhaps you consider fun fur scarves the bane of knitting society and prefer to steer new knitters towards the wool and cotton blends. Some might call you a bit of an elitist but you know that you've been doing this craft long enough to respect the history behind it and honor it with beautiful piece that can last a lifetime.
http://marniemaclean.com Take this quiz!