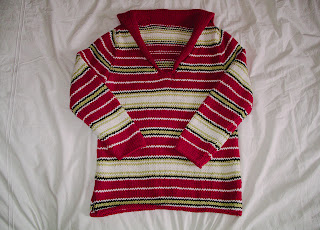 Finally. It's here, at last. Yup, Kitsch has landed and been finally sewn up. Just waiting seam pressing now. I won't describe the very colourful language used during said sewing up. Use your imagination ;) It was so difficult to get the stripes on the sides to match up and I had to restart several times. Weirdly though the arms were easy peasy......funny that. Anyway, she looks lovely and I'm very happy with her and can't wait for warmer weather so I can actually wear the little darling.....

I visited Get Knitted again a week ago last Thursday with my mad knitting friend Jackie and it was just such a fabulous visit. Imagine being surrounded by loads of lovely yarn, knitting books, knitting magazines, Brittany needles and Clover doodahs. If that wasn't enough you can make yourself a drink and looks through all the lovely books and magazines.....honestly, it really is knitters heaven ;) Sue has been ever so kind and let me swap my skein of Colinette Jitterbug Popsicle sock yarn for a much brighter version. No doubt to stop me harping on about how different some of the skeins are compared to others .....can you believe this is the same shade? Now we all know I love bright socks so I am just delirious that I can change the much greener version for the funky bright lary one! Very big thanks to Sue ;) 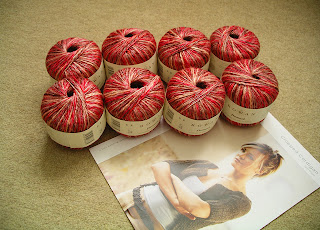 I was very restrained with my buying and bought enough Damask in Zircone for Tulip from Rowan 41 and a Cropped Cardi pattern from Blue Sky Alpacas. I'd seen the shade cards but boy was it different seeing them in the flesh. I totally changed my mind from what I'd seen in the shade cards. They really only give you an idea. This design is my favourite from the new magazine and the one that as soon as I saw it just had to have it! Of course, you will know exactly what I mean ;)

It's been a busy time with all sorts going on. I upgraded my Blogger template so had some tidying up to do as re-inserting all the various HTML codes that hadn't migrated. Amazing how much time that takes but all is well now. 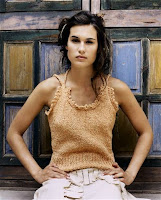 I've done lots of knitting but not so many photos. I've finished the knitting part of Soleil from the new Rowan Kasbah Collection and its waiting sewing up and then the border to be added. The pattern has a sewn on knitted border but I don't fancy that so will try some type of crochet border me thinks. 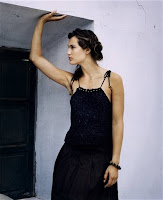 I'm now working on After Dark also from the Kasbah Collection using yet more Summer Tweed from my stash. Oh it does feel good using yarn from stash :)


My Fletcher coat has all been knitted and pressed and is now next in line for sewing up. I was so elated after finished Kitsch that I sewed a sleeve on straight after. I surprised myself totally by doing this but was glad I did. Thankfully sewing up Iro is far far easier than the dreaded stripes of Kitsch. So not too long now and I will have me a knitted coat! YAY!!!

I've also had lots of time to think and decide on what else I want to make from Rowan 41 so here goes: 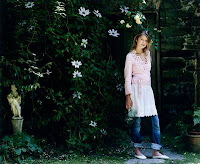 Foxglove just wowed me straight away. I almost have enough Calmer from stash but not quite and as I didn't fancy frogging the vest top that is just waiting to have crochet straps added I managed to order an extra 2 balls to make sure. The shade I have Flamingo is discontinued and I wondered if I'd manage to get any more, but luckily I did. It might not be the same dye lot but hopefully I'll get away with using for edgings & the tie. 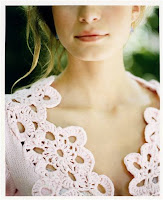 The only thing I'm not so keen on is the crochet flowers which are really too girly for me. So any suggestions for an edging would be gratefully received! I did see a book on Amazon for 150 Crochet Edgings - maybe that would be a good idea especially as I need an edging for Soleil too! If anyone has seen the book, opinions would be great ;) 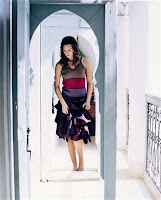 I love this vest top Juniper. I love Calmer. What a perfect partnership. And yep, I get to use more stash! Though of course I don't expect I'll do stripes, maybe just a little border instead. 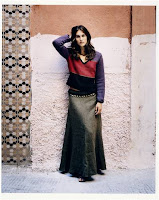 Spice tempts me too and I was umming and aahing between this and the next design Maris. They're still on my possibles but I think Foxglove is the way to go. Isn't it fab there are so many garments in Calmer to choose from! This makes me v. happy indeedy ;)

I think Maris is the more versatile of these 2 but we'll see how things work out. By the time I've finished the next few planned projects who knows what I'll want by then ;) 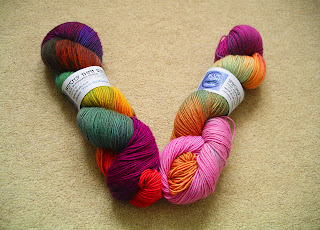 And last but definitely not least, my Valentine's Day gift from my DH. Yup more Socks That Rock, this time in Fire on The Mountain and Fairgrounds. I've started Fairgrounds already, I kinda feel lost without having a pair of STR on the go. They relax me so much watching the fabulous colours appear, kinda like therapy really, but much more enjoyable ;)
Posted by RoxyK at 10:30 pm 11 comments:

Thank you for the lovely comments on my hoodie. It is indeed the softest yarn imaginable and this is one yarn you can wear next to your skin without any irritiation whatsover. In fact I would wear it with nothing underneath except for the fact I'd need to wash it each time. Thats how soft it is.

Get Knitted a week ago last Saturday was amazing. The shop is LARGE, light and airy full of wonderful yarns. Sue & co have really done a fantastic job and it is well worth a visit, or preferably several. Having only just paid for my STR Sock Club I only bought a couple of items but it is just so good being able to see and fondle all the lovely yarns in the flesh ;) There is just so much yarn though its a little hard to take it all in. Most yarn shops are teeny and you're falling over people. Not here, oh no, there are sofas and drinks and magazines, oh and did I mention all the YARN!!! 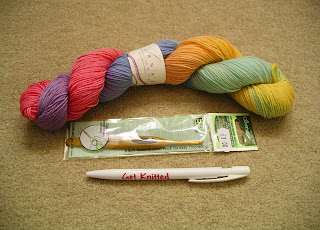 The Clover Soft Touch Crochet Hook I bought is truly amazing. I've been crocheting a dish/washcloth and finding my finger got very sore and almost blistering forcing me to stop. It was metal as a smallish size so I really needed an alternative so I tried one. And I love it. So much so I've had to order a set from Web of Wool with case of course and will probably sell my old ones. I can't stand metal anyway so the smaller ones will definitely have to go. I thought crocheting dishcloths might make them a little more hardwearing and also would avoid the dreaded cotton arm ache. But defeats the object if the hook makes my fingers sore. Hurrah to Clover! Clever lot they are.

I also picked up a tip for the KnowKnits case which I've found to be pretty useless as I can't get it to close it properly. Again, defeats the purpose. But Carol said some vaseline on the cord sorts that problem out. Good idea, cheers Carol! I tried it with some lypsyl and that worked a treat - yay :)

It is that time of year again. Oh yes, the new Rowan collection came out on the 1st Feb accompanied by new yarns and new booklets. I absolute love the new Rowan Magazine 41 which arrived yesterday to my delight and surprise which will explain the late post! Sorry guys, but I had to drool over the new mag. I love this mag and already have several items I want to make. I'm ecstatic, a lot of it will be from stash which is even better though I can't wait to try the new yarn Damask. More next post, once I've whittled down my many favourites ;) Oh so different from last season when I struggled to find new things to make. 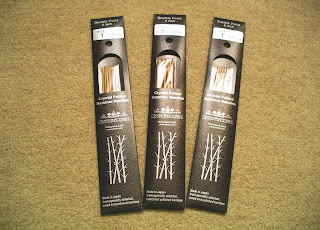 Also arrived were the fabulous Crystal Palace DPN's in the 2.25mm sizes that I'd been desperate for. They are indeed stronger as I'd been told and I so wish they were sold in the UK. 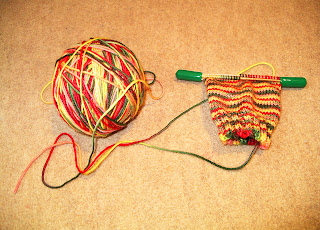 Oh yes, what have I been knitting? Well the Fletcher coat in Noro Iro is 5 cm off from being finished. Can you believe I ran out - seems to be a habit with Noro as it rarely if ever happens with any other yarns. Anyway as its the hood I'm not worried about dye lot so had to order another skein. It sure makes it an expensive knitted item though quite reasonable really for a coat. 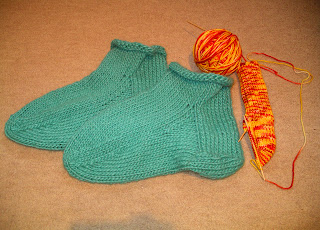 When it turned cold I decided to knit the second Fuzzy Feet slipper sock which was whipped up in no time. Here we have a pre-felting picture - my they are large! 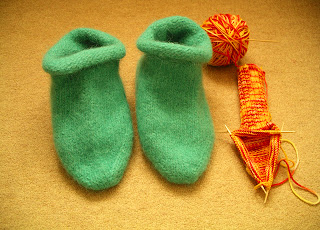 And then a post felting FO picture. This is after the second time in the machine. Just one wash proved very unsatisfactory but they're better now, though still too wide for my liking. Maybe they'll have another trip through the washer at some point. But no way are they as nice as my Kureyon felted slipper socks which are far nice and a much much better fit. The Fuzzy Feet have a kind of pixie foot shape thing going on which I'm not so keen on. They do the trick though, but I wouldn't make another pair. I kinda expected Lopi to felt quicker than it did, but I know for next time. 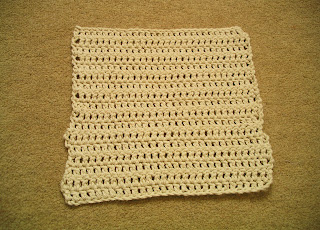 This is the wonky crochet washcloth that gave me a blister I mentioned earlier which is really rather embarassing and shows off my crochet skills to a t. But hey, I got the hang of it after a while as you can see and managed to do the rest of it straight. Practice makes perfect eh? And I'm sure the next one will so much easier with my lovely Clover Soft Touch hooks ;)

I've also been working on a few summer bits that were hidden in the depths of my Bagsmith bag but there's nothing to show yet. I'm just picking up whatever I fancy. I'm holding off starting a new big project till I've made a decision on the new Rowan collection and had a look at the new yarns in the flesh. 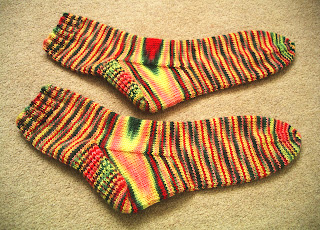 But I couldn't leave you without this fabulous FO. Yup, another pair of Socks That Rock, these in X-Mas Rock. I can't tell you how much I love these socks. Just amazing ;) And I just love the flash pooling on the gusset - just like go faster stripes!
Posted by RoxyK at 8:30 pm 11 comments: