It was all going so well last post wasn't it? But the jobs took their toll and I started getting a sore throat every day and swollen throbbing glands. Not a good sign so I cut down. Too little too late I'm afraid and had a relapse once we came back from our annual week in St Ives. I knew it was risky going but we discussed it and made sure we would have rest breaks for tea/food throughout the day and get taxis back to the flat. And we did. But I didn't have the best sleep there due to work on the water mains and after coming back home woke up feeling like I'd been run over by a bus. 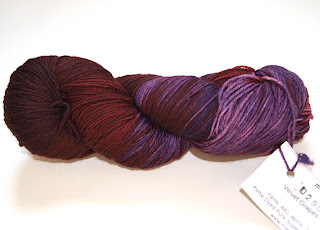 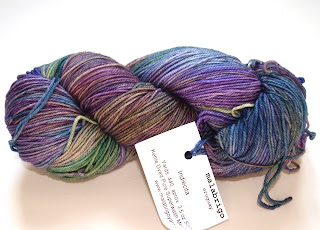 I was so unprepared for a major relapse. I really thought things would eventually just keep getting better, though really slowly. To find I could hardly do anything for myself again was crushing. A visit to the docs and my meds were increased. Thankfully I feel better in myself now which is good. Body is still crap though. Walking is a challenge and now I have pain in my legs so have painkillers for that. But I'm still knitting and have gotten some lovely pattern books too, like Kim Hargreaves ones and the fab Love to Knit Socks. I just couldn't resist getting 2 skeins of Malabrigo Sock Yarn which is gorgeous and asking nicely to be knitted up.

After the shock of the relapse I talked to my doctor and realised that not reading up about CFS (Chronic Fatigue Syndrome) was a seriously bad idea. And pretending that Post Viral Syndrome is not another name for CFS is frankly, quite stupid. But PVS doesn't sound so bad does it? And not so permanent either. Though it can be depressing reading about CFS, you also learn that you can deal with it and more importantly, how to pace yourself to avoid those relapses! So I've been doing a fair bit of reading and practising this pacing lark and making sure I have breaks during the day. Surprisingly, knitting in front of the TV doesn't count as a break! Who knew? I'm not very good at total relaxation but I'm learning and getting better at it. 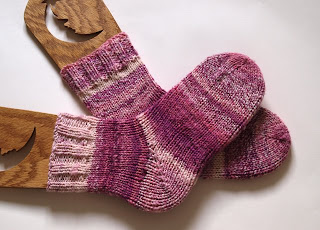 So back to the knitting. I would so love to show you a bundle of FOs. Like I used to. Can you believe I've been ill for over a year now? But I need to accept that I won't be able to churn out 20/30 projects a year now. That it doesn't matter as long as I'm still knitting and enjoying it. And enjoying it I am. But I do have one lovely FO I finished last month from stash. Gorgeous bedsocks :)

My finishing/WIP pile grows and grows. I rarely have the energy to complete the finishing bit as it takes concentration and I'm such a perfectionist. It's frustrating but there's no point stressing over it. They'll get done when they're done. Currently I have 1 and half socks sock, one snug boot and one slipper. Plus Dawn and Cherish to finish sewing up. Though to DHs amazement I've been walking round wearing one slipper. He thinks I'm crazy. Who cares, I love the slipper! It's sibling will arrive soon and I won't look so mad then :) Pics will go on Ravelry before they get here lol :) 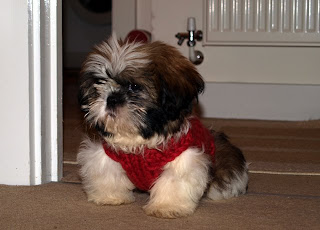 Last but definitely not least, we have a new addition to the family to keep me company. His name is Scruffs and he is TOTALLY ADORABLE!!! Isn't his sweater cute? A real quick pattern from Ravelry using less than a ball of Big Wool.

So have a lovely Christmas and Happy New Year!
Posted by RoxyK at 9:30 pm 7 comments: