Life Gets A Bit Weird

You know things aren't going great when you come home from a manic morning at work to have your lunch to find the police have sent you a summons. Yes, apparently I went through a red light somwhere in Leicestershire at 8.15am on a Tuesday morning. Bit difficult when my car was outside my house at the time before I trundled off to work. In Weston-Super-Mare I might add. This kind of thing just sends your stress levels haywire. You know it isn't you, but the summons form didn't have an option for that. So then begins the fun of trying to ring and speak to a person.....

I did manage after several tries to leave a message and thankfully a few hours later was called back with an apology as it had been an error. I'm really glad I managed to get it sorted the same day. It would have played on my mind terribly.

Good news at work though. We interviewed 3 people in the morning and I rang and offered the position to our favourite in the afternoon. And even better, she accepted! Usually the manager does interviews but he's on holiday and the new person would be working with me and the other office administrator so it made sense we chose and interviewed. Though timewise we could have done without it, it all went well and finally there's a little light at the end of the tunnel.

I did more hours overtime over the last month than hours I work per week which is fine for the extra money but not good for my sanity and definitely not good knitting wise. Though I've said no more o/t or not much now as we'll shortly be off on our hols and no way will I get stressed from work before we go. I'm behind as it is without work stress. Is it just me that sorts everything holiday related out or does anyone's DH help out too?

I've also realised going away the day after my birthday is not actually a great idea. Not sure if I'll feel like a meal out as I'll be running round like a headless chicken trying to get everything ready. Oh well, we'll see soon enough won't we?

Added to the fun of receiving the summons we're having trouble with our burglar alarm and have been let down by a recommended company 3 times out of 4. Not good before you go away. Neither is having your electricity meter stop working again. Its lasted a year! If that hasn't been enough I've had an absolute nightware with the edging of Tulip. The knitted on edging is fine, but the edging knitted separately has been horrendous. The pattern isn't clear and the instructions make little sense. If you look at both pics of it in Rowan 41 you can see the edgings have been done completely differently on both tops - 1 has the ws edge facing and the other rs facing. It gets worse. The sleeve edging isn't long enough to go around the armhole. I've tried and failed to get it right countless times. Frankly, I'm sick of the sight of it. The main body edging is done and I don't care how it looks anymore or even if it wants to stick out a little. I shall bash it about with the iron a bit. No way will I redo it!

I will start again with more stitches for the sleeve edging though after sewing up the sides and deciding how long the edging really needs to be. Then finish the ties one which is almost done. Amazing how long that takes too. I really hope its worth all this trouble in the end.....

All this ranting might make you think I wouldn''t have much to show for my recent efforts, but surprisingly I have quite a few FOs to show. DH scared me last week when he said you realise its only 2 weeks till we go away and it dawned on me the amount of finishing I had to do. So rather than start a nice new calming project I've done non-stop finishing. 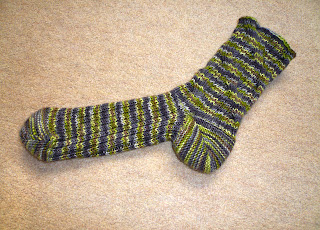 And first FO is the lovely Monsoon sock from my Blue Moon Feb Sock Kit. I haven't managed to start the 2nd but hopefully will get around to it once all this finishing is out the way ;) I've really enjoying knitting the sock and though it had lots of firsts for me, I found it all relative simple and easy to follow and lots of fun. The shape still amuses me no end ;) 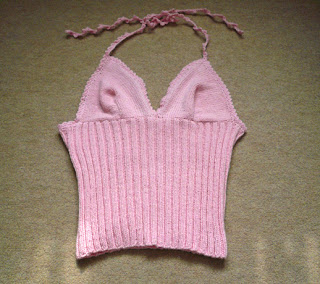 Next FO is the Halterneck Top in Rowan Calmer. Officially it is the last 2006 FO as that was when it was knitted. It always amazes me how long a crochet edging or tie can take. DH loves this top and asked if I'll be taking it away with me on our hols. Praise indeed! 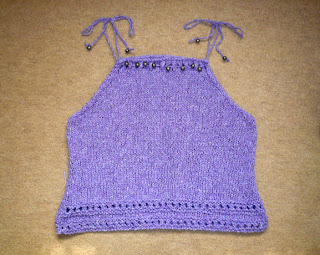 Third FO is After Dark in Rowan Summer Tweed which is a really pretty top. The Rowan beads look fabulous and I'm really glad I got them. I will try something else for the ties though as I'm not totally keen on using the same yarn for the ties. It looks ok but think they could look better. It'll do for the time being though. 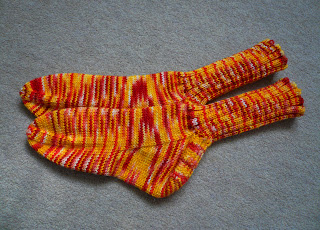 Last but not least are my Mango Speed Demon Sweet Georgia socks. Boy are these lovely & warm and oh so comfy. Perfect house and bed socks especially for those cold spring evenings.

This will be my last post till we're back from our hols. Its my birthday at the end of the month and we're off to Kefalonia the day after for 2 weeks. Fingers crossed we get warm weather! Being used to the tropics and not going to the Mediterranean for 20 years we could be in for quite a surprise. I'm sure it will be lovely though doubt much time will spent in the sea ;)

PS Sad news I'm afraid. Our beloved hamster Custard passed away on Sunday in his sleep. I know he was 3 years and 1 and a half months old but it was still a shock and we both really miss him. We gave him a little burial and hope he's happy in Hammy Heaven feeding on a never ending supply of organic sunflower seeds.
Posted by RoxyK at 1:00 pm 13 comments:

Yup, at last, Tulip is almost finished. The fronts and back are done and shoulders bound off. It's been pressed (this is definitely a yarn that looks much better after pressing) and is ready for edgings. Which will take forever no doubt. I feel really relieved the main body has been done. It's really felt like its dragged on, though maybe this hasn't been helped by the multiple WIPs I seem to have right now.

There is the Kim Hargreaves lace shrug which I wanted to take on holiday this year. Which is next month. Yes, you can stop laughing now. Problem is, I can't stand lace. Really, it winds me up. I keep asking DH if he can imagine me wearing it as I'm not sure (in the hope he'll say its horrid and I can frog it) but he keeps insisting he can picture me in it. Darn! So its a very slow going project as even 10 rows of lace is enough to send me barking mad ;(

So I need a nice 'proper' project to keep my sanity going in the evenings after I've done some horrible lace. And I think it has to be Foxglove in Rowan Calmer. Soft, soothing & oh so pretty. Perfect ;)

But I've been really good and carried on with my other WIPs first so I feel I've actually made some real progress at last. A good feeling ;)

I've actually gone and done some pressing. Well quite a bit in fact! This was quite a surprise but unfortunately rather necessary before I drowned in a pile of FOs waiting for pressing and finishing. So After Dark is pressed and a matching yarn found. Thats it so far though, whaddya expect - miracles? Soleil is also pressed and waiting some attention. And a couple of bits that needed seams pressing have been done too. Phew, glad the pressing is all done for a while...... 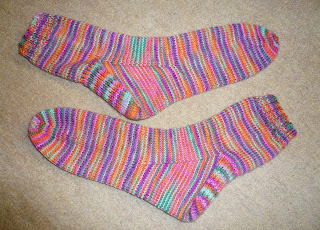 My lovely STR Fairgrounds sock now has a mate! Yippe, another pair of socks have landed ;) I love them. They love me. All is good. Except I've had to start handwashing my handpainted socks yarns. No more chucking them in the machine for me I'm afraid. My X-Mas Rock STR became a struggle to get on........making me wonder if my ankles had grown. But no, they've started to 'bloom' quite a bit more than older socks. The machine has to be blamed (though possibly I could have washed them on the wrong setting...) but to be safe and keep both them and me happy handwashing is the way to go. It's not a big deal I've found out, especially using Lakekand's Lavender Wool Wash which is a wonderful no-rinse product.

My washing machine is notorious for felting things when its not supposed to and I know it shrinks my socks a little each time. But they usually stretch back again. Obviously this isn't really the best way to treat expensive handpainted yarns.......no matter what it says on the label! 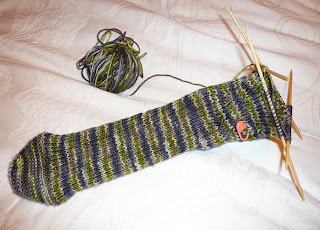 My STR Monsoon sock is doing rather well. Even DH commented on how fast it seems to have grown ;) The garter stitch heel was rather fun to do until I realised the sock was too long and I had to frog 10 rows of rib and do it again! I can't quite work out how you make sure the sock is the right length when doing toe up. Especially as I like a snug fitting sock. But not having to decrease on the gusset was truly wonderful and the cable leg part is flying along. I do wonder though if the 2nd sock (when I get there that is!) will drag and I'll suffer from SSS. Time will tell no doubt :)

Does anyone else think my sock reminds them of umm, something usually related to male anatomy??? Makes me smile whenever I knit the sock. DH thinks the same too. Sure is one strange looking sock ;) 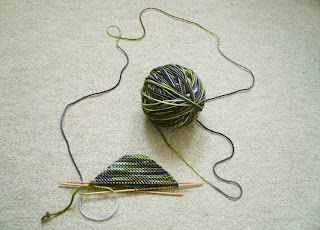 The garter stitch toe (yup, another first) was simple to do and a success until I realised it was much too big so I had to redo that on fewer stitches. All good fun though eh and practise does make perfect doesn't it?

Hope everyone is having a good Easter. It's the first time I can remember it being sunny all Easter for a long time and its great. We were at the beach and had chips on the pier Friday which was fab ;)
Posted by RoxyK at 9:00 pm 8 comments: