Now Thats Over With

Now the weirdness is done with perhaps I can get back to normal. Though I have to say my DH was rather surprised I mentioned the assassin business. He was expecting the police to turn up any time.....why I don't know..... I've never even seen a real firearm never mind used one. 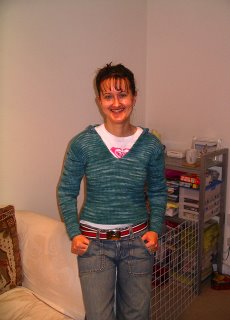 Yay - at last, FO pics of my lovely Blue Sky Alpacas Hooded Top in the lush Malabrigo. I'm so pleased with it. It is so snug and warm and sshh....don't tell anyone but I hadn't even pressed the seams before I wore it and these photos were taken.... 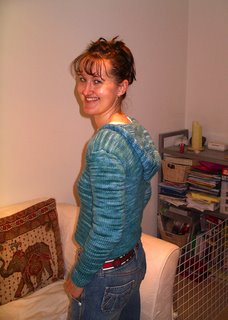 Isn't that hood just the best? It is a PROPER hoodie! I've seen lots of hooded tops and recommendations but none have been proper hoodies. This is, for real ;)

It's been such a mild winter that the multitude of planned scarves, hats and gloves didn't really materialise and I already I'm thinking of the new season and the nice new stuff I can knit. The Vina Bag from Rowan 39 has been started. Well, 4 rows of 3 coloured fairisle IS a start. It will take me forever, I'm sure. Cotton and me really don't have such a close relationship but it is so great for bags. And as the fairisle is so slow I shouldn't have any trouble with cotton arm ache for once!

I had a little clear out of my knitting bag and found a surprising number of half finished/just started items in there. A hat needing ends weaved in. From last winter....oops ;) A camisole on circs that took me a while to figure out what pattern it was from. I had to count the number of stitches.....unlike me not to have notes.
A cotton bag that needs a cabled strap which may have been around for over a year too. A half finished Fuzzy Feet felted sock which was finished in a couple of hours. Wonder when the other foot will be done? A gorgeous cami in Rowan Calmer that just needs crochet straps. That one I will do soon. Well, before holidays anyway.

I just can't bring myself to finish an item when I know I won't be able to wear it for months and months. I'd rather leave it unfinished or I'm sure I'll just forget about it and it will lie unloved and unworn somewhere in my wardrobe which would be truly awful. If I finish something I can wear straight away I'm always so delighted. Which could explain the sock addiction for 9 months of the year!

The Bomber jacket in Rowan Denim also found hiding in the bottom of the bag will probably take years to finish. I mean, a row or 2 here and there won't get far. But it will get done and most importantly, I won't get the dreaded armache. Remind me NOT to buy more cotton unless I absolutely MUST. Like the lovely Kim Hargreaves kit last year, Buttercup. Note to self, must knit this to take on holiday this year. 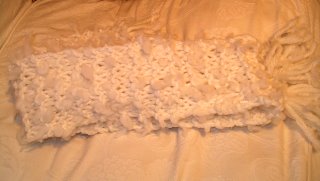 A few of my FO's are missing from 2006 so I'll try and get pics of stuff missing and added in the next month or so. Yes, that means doing the crochet straps on my cami - I don't count that as knitting therefore technically it is an FO. And can you believe I forgot to mention my last FO of 2006 was a lovely snuggly scarf in Big Wool Tuft. So quick to knit up and amazingly tactile. It was a hit. Though not been worn so much. No, I'm not complaining the weather hasn't been cold enough, honest!

My love of STR has continued and though I had to repay my Sock Club as their daft now ex-bank decided the club was a scam and refunded all our money! I know, too ridiculous for words. But its all sorted now and I can't wait till Feb and the first package. Gosh, its so exciting ;)

So no surprises that I've finished one Xmas Rock sock (photos next post) and the other is on the needles. Which brings me to another point. Why are there no UK stockists of Crystal Palace bamboo DPNs??? This is scandalous and should be addressed immediately. They are the only bamboo DPN manufacturer of 2.25mm needles that I need for my lovely Socks That Rock. I use Brittany's but am tired of breaking, sitting, rabbit eating them etc. Rant over. I've now ordered from someone on Ebay in the US. UK retailers, please take note!!!

Healthwise things are erm, rather odd. My allergy RAST blood test has disappeared off the face of the earth and no trace can be found. Brilliant. Since having the B12 jabs my reactions haven't been so severe, but are still occuring. And no, your tongue bleeding after brushing is not an enjoyable thing. So back to the docs we go to discuss all this stuff plus the latest tests. Which I had to postpone as I caught a virus and have been poorly all weekend and only just starting to feel alive. Thats a new one, changing a doctors appointment as you don't feel well enough to go. Oh dear. I thought I'd done well and managed to avoid all the bugs but I obviously didn't. One of the guys went off sick from work. For sure a possible culprit.

Anyone leaving comments recently will have noticed I've changed the settings so that comments are now verified. I hate typing in those letters and always do it wrong myself, usually several times, but too many rude spam posts kinda forced my hand. Sucks I know. 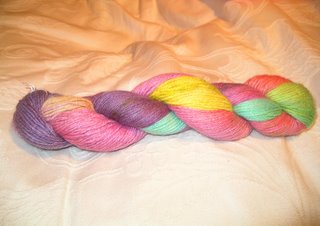 Well look what we have here. Yes, its an amazingly soft lush skein of Posh Yarns Sophia 100% cashmere 4 ply sock yarn gotten from one of the sale days. Words can't describe how this stuff feels, it is the softest yarn ever. Fabulous service, quick delivery. What more can I say? 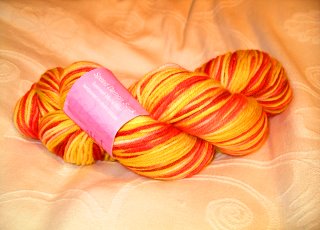 Aren't these glorious colours. I ordered it from HipKnits in their sale at the beginnning of December but didn't get it till well into the New Year. Don't ask, lost parcel and other issues BUT it all ended ok. Its the Mango colourway from Sweet Georgia yarns and called Speed Demon Sock. Think they might be the next socks I cast on....or should I go for Posh Yarn instead. Decisions, decisions ;)

Of course Saturday is the opening of the new Get Knitted shop in Bristol. I hope to get there at some point in the day, and wish Sue all the best!
Posted by RoxyK at 6:00 pm 9 comments:

Having been tagged now 4 times by Piglottie, Queen Frogger, Curly Cable and Mandella I guess I'll play. So here are my 6 Weird Things. Though of course I won't be tagging anyone cos ya know I just can't follow rules ;-)

1. I've wanted to be an assassin ever since I was a teenager. All that secretive sharp shooting and travel sounded so appealing. Not quite so keen these days....

2. I go sleep by laying on my left side till I'm sleepy, then I turn over and go to sleep on my right side. I'm not alone in this particular weirdness.

3. I'm often aware of when I'm dreaming and can manipulate my dreams. Rather cool really.

6. I prefer animals to humans and when younger always thought having a litter of kittens far preferable to a baby. I'd go for a litter of rabbits now though ;0) Also explains my menagerie which currents consists of hamster, 3 chinchillas and rabbit. Oh and 1 husband.

Of course a lot of you already know that I'm allergic or intolerant to practically everything so I didn't count that in my list. Anyway, the list would be too long! 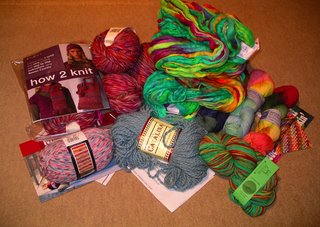 Now thats done back to the holidays. Christmas was lovely as was New Year. Having been ill for 3 weeks over the holidays last year it was just great to feel ok. Santa brought me some lovely yarns - as you can see.

I went to the sales but bought NOTHING in either House of Fraser or John Lewis. Says it all really. Quite shocking though. And unexpected. But probably a good thing as I've now paid my membership for the Socks That Rock Club and I can't wait. I am truly addicted to the stuff and its awful as they keep bring new lovely colours on the website that I am just totally powerless to resist ;) 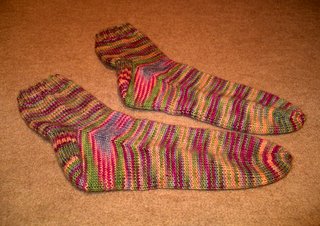 I finished my lovely STR socks for Christmas and happily spent 15 minutes deciding which yarn I'd cast on next. No surprise really, yup, its another STR skein, this time in Xmas Rock which I LOVE too much for words. If this carries on I'm gonna have real trouble casting on any other sock yarn! 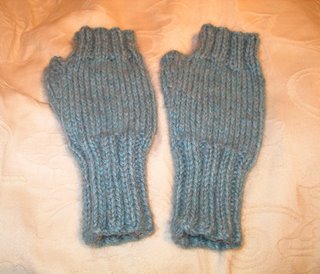 Another FO for you are my fingerless gloves in Catalina Baby Alpaca Chunky which are lush and oh so warm. I've really never felt anything like this yarn.

Also knitted up is the Rowan Country Kit I got and as well as getting blue fingers now have all the pieces ready to be sewn up into a bag. I didn't follow the bag pattern but prefered the scarf pattern so used that.

I also managed to fit in some sewing up too and my fab Malabrigo Hoodie has just been sewn up and is beautiful. Pics will follow next post. A little sewing up was done to Kitsch which was not fun and only reminded me why I can't stand stripes. They are a real pain to sew up ;-(

Another pressie I got that has kept me occupied for hours is Daxter on the PSP. I can't put the darned game down. It's wonderful and oh so addictive. I'm kinda looking forward to finishing it so life can get back to normal. Yeah I know, some hope ;)

The Knitting Pattern-A-Day Calender was quite a disappointment for me this year as only I really liked 2 patterns. Having got quite a collection already there was very little exciting in it for me. So that will be going in the charity bag.

Though the holidays have been nice they went so quickly due to multiple visits to the doctors for B12 jabs. I got a call from the consultant quickly followed by the doctor as my test results showed I was anaemic. The jabs were very painful and a nightmare to schedule over the holidays. I had 3 a week for 2 weeks and I can't tell you how pleased I am their done now. So the useless receptionist that told me my blood test looked ok was talking total rubbish. Oh how reassuring I don't think! I also had a visit to see a consulant dermatologist at another hospital which was such a waste of time it was unreal. Oh well, what can you do? So back to the docs again in a week or so to review my latest blood test results.

I did the stupidest thing too - I sat on a Brittany needle which promptly snapped. Couldn't believe it. Especially as I'd only just got back from having my 5th jab in the same area! No, trust me, it was not funny. Nope, not at all ;-)

Poor old Custard is back on the antibiotics as he's got another eye infection. We're trying liquid tears this time as well to try and stop his eyes getting so dry. Fingers crossed it does the trick and no more trips to the vets are needed...
Posted by RoxyK at 4:52 pm 6 comments: