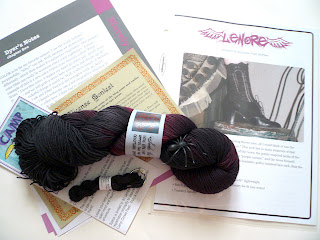 The latest Socks That Rock Club Kit arrived just before I did my last post but as they were still arriving didn't want to spoil it for anyone so waited till now. Hard to photograph but a very unusual colour and gorgeous in the flesh. Notice the little friends attached? They really are a little lifelike......

The pattern is lace and we know lace isn't my thing so I'll use something else. I did start the Firebird sock kit thinking it would spur me on, but I find the pattern a little beyond me right now so thats sitting waiting patiently. 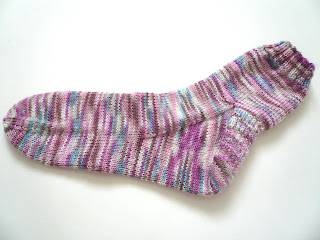 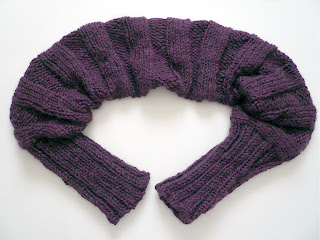 I started making this shrug from the latest Yarn Forward magazine while I've been ill as it was so simple even I could manage to knit it without totally messing up. Brain fog you see ;) I wasn't sure whether I'd like it and thought it might get frogged but once I'd finished the main body which is just a rectangle, it kinda looked rather good. Perfect for just slipping on when its a little nippy indoors or maybe for wearing in the car. And the yarn is from stash that I've had years. I like using yarn from stash ;)

I still haven't managed to take a picture of the almost FO blanket.......which is now having its ends sewn in, as I just keep forgetting. DH glued the defective Harmony which worked a treat, so I was able to carry on using it.

Ravelry forcing me to face up to my stash mountain has been good in some ways. Time to get rid of stuff that I've had for years, especially anything with manmade fibres in it. Not the Calmer of course, that doesn't count! And realistically, now matter how much I'd like to make Bomber, the jacket in Rowan Denim, it is never actually going to happen. It gives me chronic arm ache and the pattern is a pain as its not a standard rib so mistakes are far too easy. And even worse, you have to knit it longer than normal to allow for shrinkage! Knitting should be fun, and though it might be painful selling the packet of 20 balls I fondly remember buying in House of Fraser, I think I'll feel a lot better when its frogged and gone. I hope so anyway.......

Is anyone else feeling maybe its time to destash a little or sort out after Ravelry has made them face the reality of the size of their stash? Or is it just me......

I don't really know quite what to write about my illness. It's tempting to ignore my blog as I actually have to write stuff and at the moment I find Ravelry easier as I can just post pictures and say nothing. It's been a difficult time and rather than recovering, the minute I attempt to do anything requiring energy, I end up worse. As yet another failed attempt to go into work a few weeks back for an hour or so proved. Not helped by boss saying 'so you won't be doing end of month then' after telling him I wasn't better. I broke down in tears and more doctors visits ensued. I've been diagnosed with post viral fatigue and depression on top of the severe asthma. The fatigue explains a lot. The depression I've found hard to accept and deal with, but am now on medication and not so embarassed about it as I was. Neither have been helped by my asthma being the worst ever. I'm now on another lot of new medication for that too. My peak flow was so low when I saw the asthma nurse I was totally shocked. So, all in all, things haven't been good. I've been signed off by the doctor again and now won't be returning back to work. I never thought I'd suffer from depression, but the stress of my illness and the pressure of being forced to keep returning to work was just too much. I have no trouble standing up for myself but when you're already unwell you expect more from your employer than a load of stress and pressure. I wasn't even going to mention the depression on my blog initally, due to embarassment. I'm past that now. Funny how we react to things sometimes.

I have been to the Bristol Homeopathic Hospital though as I managed to get a cancellation which I was pleased about. Unfortunately the effort of getting to the hospital totally wiped me out and I'm still recovering from that. But the process has started and I've had my first remedy and have my next appointment at the beginnning of January.

So the knitting, blogging and leaving comments will be sporadic for a while. You'd think I'd get more knitting done but there are days when I can't manage a stitch. So I'm sticking to simple quick knit projects that aren't challenging and are easy to pick up and put down. And finishing something always gives you a boost doesn't it? 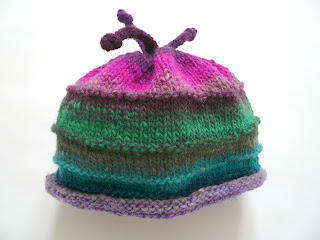 And this is one of my quick knit projects from 101 One-Skein Wonders (how I love that book!). the hat is really cute and I'm really pleased with it. It's called Ela's Favourite Hat for anyone interested and just uses a skein of Noro ;) 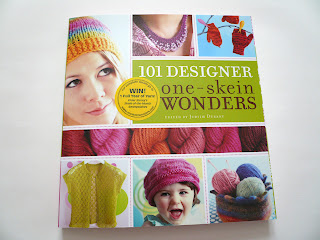 I also got the wonderful 101 Designer One-Skein Wonders which recently came out and is just as good if not better than the first book. There are several designs I already have plans to make. It's the perfect book for me right now, small, simple projects. My homeopathic doctor was quite impressed with my felted bag and said knitting was really good as it uses the other side of the brain. We already know that its good for us, don't we? 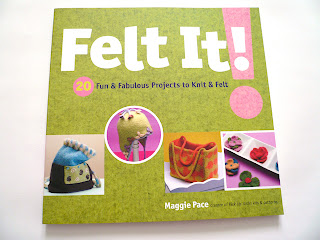 I also came across this book by Maggie Pace, who of course designs the Pick Up Sticks kits and patterns which I adore. She has a newer book which I'll get at some point. Meanwhile this book is full of patterns I'd like to make. Not yet, but hopefully soon.
Posted by RoxyK at 9:15 pm 15 comments: